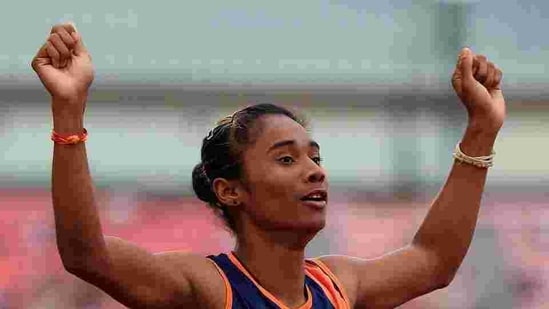 Assam Chief Minister Sarbananda Sonowal chaired a meeting of his cabinet Wednesday night where a decision was taken to appoint World Championship sprinter Hima Das as a Deputy Superintendent of Police in the state.

The cabinet also decided to amend the integrated sports policy of the state by appointing sportspersons as Class-I and Class-II officers in different department of the state like Police, Excise, Transport etc, government spokesman and Industry minister Chandra Mohan Patowary told reporters.

She became the first Indian woman indeed the first ever Indian athlete to win a gold medal in any format of a global track event at IAAF World U20 Championships when she clocked a speed of 51.46 seconds.

The cabinet also took a decision to draft the cyber security policy for the state, he said.

The meet approved a proposal to provide free electricity to all households for consumption of up to 30 units a month for the period January 2021 to March 2021.

Ths Hills Areas Department will be renamed and will work as Assam Sixth Schedule Council Department.

The meeting consented to establish mini secretariat in Barak Valley at Silchar and it will start with six departments- personnel, revenue and disaster management,general administration department, agriculture, fishery and animal husbandry and veterinary departments.

The meeting further decided to allot land to different organisations, including the Gauhati Press Club.

It also approved in principle a new campus of Srimanta Sankaradeva Kalakshetra at Dibrugarh.

Patowary said that the Council of Ministers also agreed to rename the Public Works Department as Lok Nirman Bibhag.

This story has been published from a wire agency feed without modifications to the text.