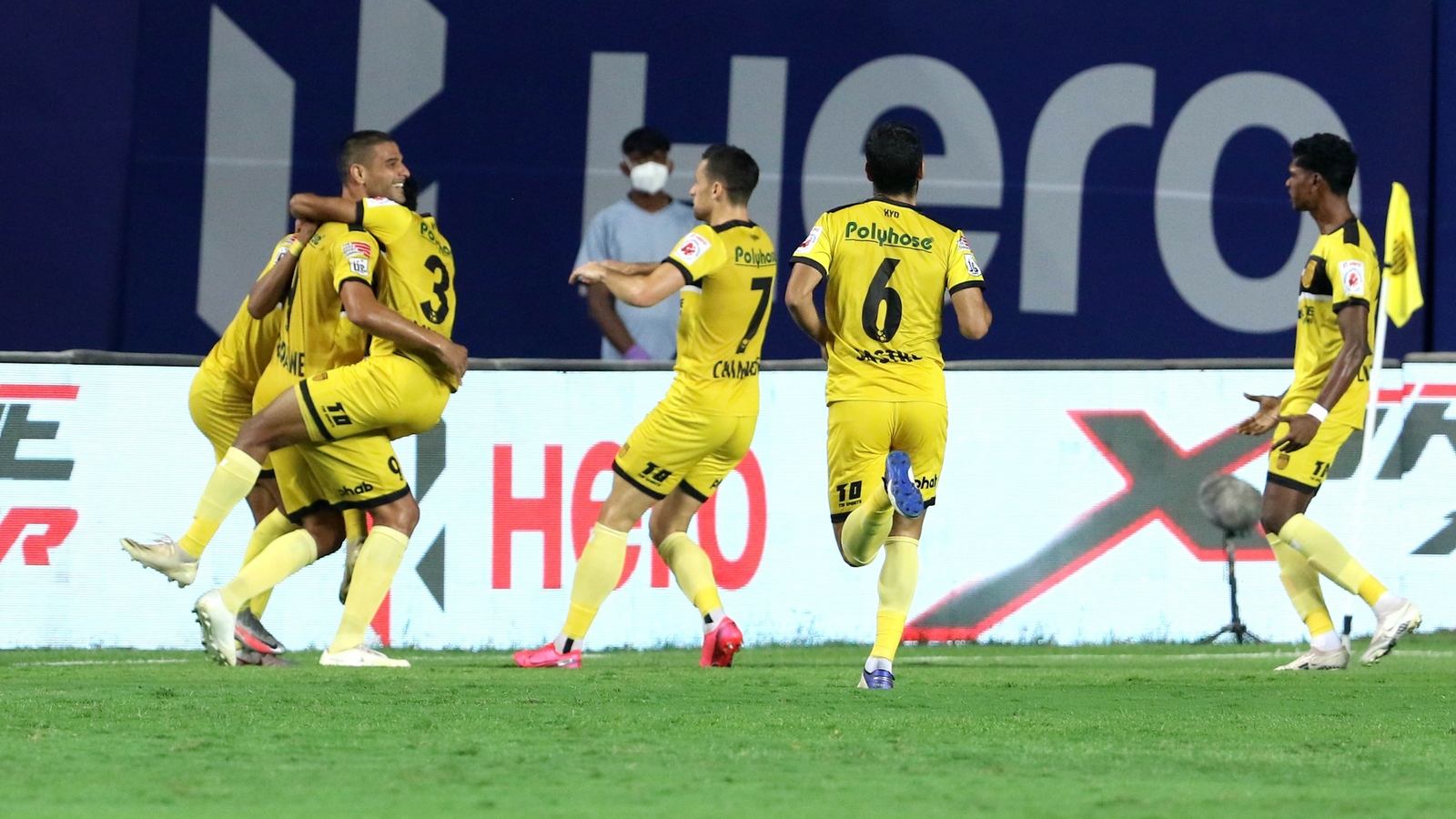 ATK Mohun Bagan players huddled in celebration as Laxmikant Kattimani’s scream split the night. As goalkeeper, Kattimani knew he was responsible for Hyderabad FC conceding a goal in the 92nd minute, which helped Indian Super League (ISL) leaders ATKMB force a 2-2 draw after trailing twice. Having played with 10 from the fifth minute and forced the league’s stingiest backline into a slew of errors, you would think the yellow shirts would be satisfied with a point; instead, they slumped on the pitch at Goa’s Tilak Maidan.

Along with FC Goa, Hyderabad haven’t lost this year—the draw against ATKMB extending their run to 11 unbeaten games. After 19 games, they have 28 points and are in contention for a play-off berth which goes to the top four in the 11-team league. “Their performance has been beyond expectation,” said Shabbir Ali, the former India captain and striker who is from Hyderabad.

Ali has a point. This is Hyderabad’s second season in India’s top league. Last term, with two wins and 12 defeats they had finished last. Then, new coach Albert Roca moved before this season began because FC Barcelona made an offer he couldn’t refuse. By the time Manuel Marquez Roca joined, it was late. After clarifying that Roca is a common name in Barcelona, Marquez said he was recommended to Hyderabad by his “friend” Albert. “He said that I could be a good coach for HFC because the philosophy is similar.”

A crunched pre-season due to the pandemic didn’t help and making matters worse for Marquez was that the full complement of five foreign players was unavailable in 13 games. No team in ISL7 has missed its quota of imports for so many games. That Hyderabad’s squad was thin on experience—their average of 25 makes them the youngest among top-four contenders and third youngest this season—meant the absence of foreigners would be felt more.

Yet Hyderabad began with a win, followed by three draws and then beat SC East Bengal. In their first five games, they had held their own against the biggest names in Indian football—0-0 against Bengaluru FC, 1-1 with ATK Mohun Bagan and beaten SC East Bengal 3-2.

“I found a group of young talented Indian players who, practically from the first training session, listened. They tried and, of course, they have quality. For me the most important thing is that they are brave. My players know they can fail but they don’t doubt what they are doing,” said Marquez in a Zoom call with a tactics board glistening with squiggles in the background.

If self-belief was in short supply because the foreigners were unavailable, that changed against Bengaluru FC. “For me (that game) was one of the keys to how we are doing in this championship. Because in the first half, (Brazilian midfielder) Joao Victor was injured in minute 35 and (Spaniard) Lluis Sastre in minute 45. And I remember at half-time in the dressing room, the players are like, scared. They are playing a team which at that moment was one of the favourites. But in the second half, (Mohammed) Yasir and Hitesh (Sharma) played at an incredible level. For me, football is about confidence. I prefer one normal player with confidence than one very good player without. And I think that these players have a lot of confidence in themselves,” said Marquez.

Hyderabad then held ATK Mohun Bagan on December 11 starting with just two imports, Odei Onaindia in defence and Victor in midfield. “It was one of the days that I was very, very proud of these lads. They are hungry in football,” said Marquez. It also explained why in India head coach Igor Stimac told this paper in January that watching Hyderabad makes him a “very happy man.”

That Marquez, 52, loves coaching young players has made him a good fit at Hyderabad who have given him a two-year extension. “I like to train young players even more than be head trainer in La Liga. I was happiest training the second team in Espanyol and Las Palmas for instance,” he said. So, it helped that five players on the roster had been scouted from Indian Arrows, the development team of the All India Football Federation which plays in the I-League. Only Bengaluru FC have as many.

Having played every game, left back Akash Mishra, 19, is one of them. “Akash is totally ready. With his quality, if nothing (untoward) happens, he will be the left back in the national team,” said Marquez. Forward Rohit Danu is 18 and Marquez is convinced that he “will be one of best strikers or winger or forward in India in closer (near) future.”

Young midfielders Sharma, 23, and Yasir, 22 have got over 1000 minutes this term. “I think Yasir’s left foot is the best in India,” said Marquez. Also 22, Liston Colaco has made an impact as an inverted winger in his first full season with two goals and three assists.

Under Marquez, wide midfielder Halicharan Narzary’s career too has seen a revival. After a goal each in the past two seasons, Narzary has got four this term. “With Hali, I told him that, of course, you have to help in defence but remember that it is the opponent who has to mark you. And I think that he understood very well. He has scored four goals and I remember three or four off the post or crossbar.”

Consistency and impetuosity can be a problem when young players are doing the heavy lifting and Hyderabad are no exception. Chinglensana Singh and Yasir have seen red cards and Hyderabad lost three on the bounce in December. Marquez speaks slowly and before talking about the game against Chennaiyin FC on January 4, he let out a deep breath.

He didn’t speak about football before that game, he said.

“I told them they could either change their sport or continue on whatever their aims were before the season started.”

Hyderabad won 4-1 and beat Northeast United 4-2 in their next game. Four draws followed including one against Bengaluru where they were trailing 0-2 till the 86th minute.

With ISL pruning foreigners to 3+1 (including one Asian), would Hyderabad have an advantage next term? “Sometimes the second year is more difficult. Now, they are the surprise of the league; next year all the people will know these players. If they keep working hard, if they are more mature and have the same focus in every training session, the normal thing is we have more advantage than opponents, especially in the beginning,” said Marquez.

Complementing the group of young Indians players are foreigners led by skipper and striker Aridane Santana.

Santana, 33, has showed commendable work ethic and has 10 goals and two assists but will now miss the last game—Sunday’s a must-win tie against FC Goa—after toting up four bookings. Whichever way that goes Ali said the team has already got the city rooting for it.

“It is because of them Hyderabad has been put back on the map of Indian football,” he said.

An irregular local season—with no league for seven-eight years since 2000—and absence from India’s national competitions stemmed from internecine trouble in the state body. It contributed to Hyderabad slipping from its high perch of producing 14 Olympians, 21 internationals, India’s most successful coach in Syed Rahim and the imperious Hyderabad Police team of the 1950s and 60s.

“Through all that in the twin cities of Hyderabad and Secunderabad, football was always popular. They now have a team that has earned the respect in ISL,” said Ali, the former India technical director and Telangana coach, who is planning to start an academy in Hyderabad.