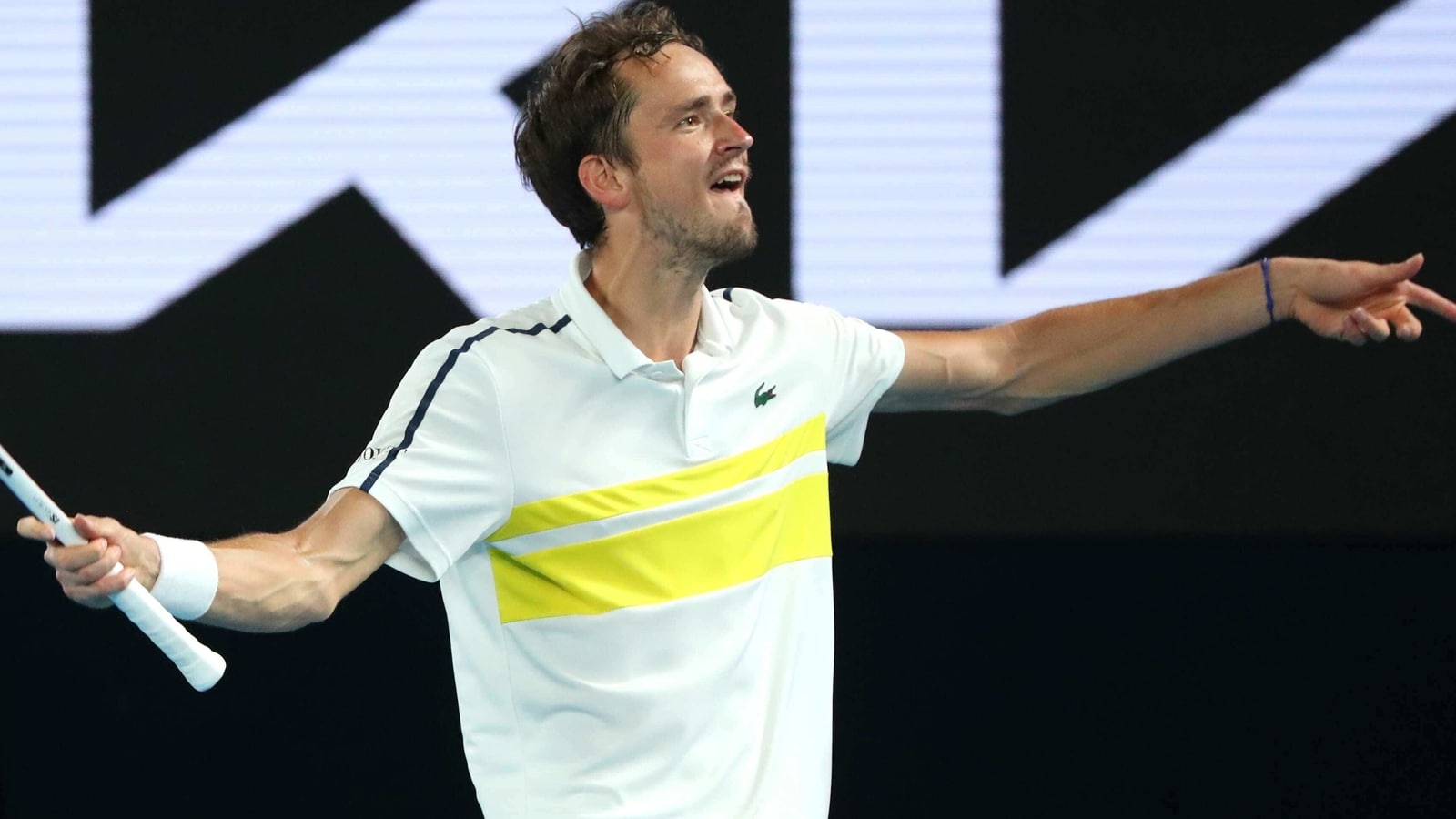 Soaking in a torrent of boos and catcalls and the odd string of applause, Daniil Medvedev folded his hands into his hips and looked around at the jeering faces dotting the stands of the Rod Laver Arena. This is how he made his entry into his first Australian Open final–not with a fist to the air or hands to the face or knees to the court, as others tend to do when they foray into a Grand Slam singles final. Medvedev simply stood at the net, free of emotions except for a half-smirk, half-scowl, waiting for the vanquished, Stefanos Tsitsipas, to meet him in the eye.

Perhaps the crowd in Melbourne was acutely aware of the history between these future stars, which traces back to their very first meeting as professionals. In the first round of Miami Masters in 2018, after Medvedev came back from a set down to progress to the next round and while they packed the bags, the day’s winner towered over the chair umpire and asked Tsitsipas to “shut your fuck up, okay?”, allegedly for being called a “bullshit Russian”. Or, perhaps, the crowd at the Aussie Open 2021 semifinal was predominantly Greek (and hence pro-Tsitsipas), as they often tend to be because Melbourne has the largest population of Greeks outside of cities in Greece.

These are but excuses. For, the boos thundering down on the smirking Medvedev had nothing to do with Tsitsipas or Greeks or immigration during the era of Australia’s Gold Rush. The truth is, Medvedev is just the latest in an expanding line of brash and outspoken next-gen players (Nick Kyrgios, prime example) who couldn’t care less if they are disliked by the spectators. But as far as the growing army of anti-heroes in tennis is concerned, the 25-year-old from Moscow is its leader and face; mainly because Medvedev can walk his talk by winning Masters-1000 tournaments (4, including the year-ender in 2020) and now twice reaching the second Sunday of Grand Slams.

Tennis has long craved a top-ranking anti-hero, and Novak Djokovic doesn’t count, simply because the Serb spends way too much breath in press conferences addressing why he is upset at not having the crowd support in matches against Roger Federer and Rafael Nadal and what he would like to do to change the fan’s perception of him. On the other hand, the new World No.3 in Medvedev wears his unpopularity like a shiny medal, and hence is the perfect candidate to give the sport a big dose of what it has missed since the days of John McEnroe–a shot of spice amid the overload of syrup.

For the length of the greatest era (ongoing and unending since the turn of the century), the top players in men’s tennis have shared the camaraderie seen only in sitcoms featuring living-room buddies–a far cry from all the off-court drama that the backstabbing times of the eighties caused. In fact, the best players in the world for about two decades now have been each other’s greatest cheerleaders. So much so that when Nadal beat Federer to win the 2009 Australian Open in five sets, he looked outright sheepish for having won over, as Nadal then put it, “the greatest in the history, no”. Especially when Federer broke down in the presentation-ceremony and Nadal consoled him by resting his head on the Swiss’s left shoulder, tactfully hiding the trophy behind his hip.

For better or for worse, but refreshingly for sure, the new crop isn’t shy of insulting a contemporary. It’s well known already that Kyrgios isn’t a fan of Alexander Zverev; Zverev isn’t a fan of Tsitsipas; and Tsitsipas has made his dislike for Medvedev rather public. Kyrgios might’ve taken it a step further than the rest by antagonizing members of the media in press conferences, but even Kyrgios would think twice before taking on the paying public over and over again like Medvedev does.

Like a top heel in pro-wrestling who understands that his appreciation in earned in jeers, Medvedev seems to diligently play his role on a loop to the galleries. The fact that he doesn’t look like your average professional tennis player only adds to his bad-ass personality. His gangly limbs sit uneasily under an unusually big and rapidly balding head–quite like a geek in a comic book who is one jilt away from turning into a supervillain.

Medvedev began with the odd big indiscretion here and there, but away from the public eye and mostly trained at chair umpires. Like when he was defaulted from a Challenger game against Donald Young, for claiming that the lady umpire was siding with his opponent because they were both black.

Or when he lost in one of the side-courts in the second round of the 2017 Wimbledon–immediately after taking out then World No.3 Stan Wawrinka in the first round, his career’s first big scalp–and was fined for tossing coins at the umpire. Later, at the press conference, when he was asked about it, Medvedev shrugged and said: “I was packing my things and saw my wallet, so, in the heat of the moment, I did a stupid thing.”

When it all came together at the 2019 US Open, as both anti-hero and earmarked player, all Medvedev really wanted to do was show his middle finger to the chair umpire in a match he was losing. In a late-night third round match against Feliciano Lopez, Medvedev was aching, cramping and losing. Lopez has Hollywood good looks and had the New Yorkers on his side from the beginning, but the crowd hadn’t really begun hating on Medvedev, until he snatched a towel from a ball boy.

Then, when the flipped finger at the chair was magnified on the large screens, the boos poured down from all directions, which Medvedev would use as motivation to turn around a lost cause and win the match. That did not silence the spectators either, who barely let Medvedev speak in the post-match interview with terrific whistles. Far from looking hurt, Medvedev looked around the terraces and revelled in it, eyes closed and hands spread apart, as if to ask for more.

“Your energy tonight give me the win. Because, if you were not here guys, I would probably lose this match. So, I want all of you to know, when you sleep tonight, I won because of you,” he said. The rain of abuse turned into a downpour. Medvedev ignored the next question and smiled once again at the stands. “Again, the only thing I can say, the energy you’re giving me right now will be enough for my five next matches.”

He was right – Medvedev carried that broken body all the way to the second Sunday, taking on the opponent and every other spectator in the largest tennis stadium in the world in each subsequent round. Then, as more boos greeted him against Nadal in the final, Medvedev turned around a two-set deficit to silence all of New York in the fifth and final set, which he would lose, but go on to win everybody’s respect. And right there, in the odd quiet of Gotham City, tennis had found a (anti) hero it doesn’t want, but so desperately needed.